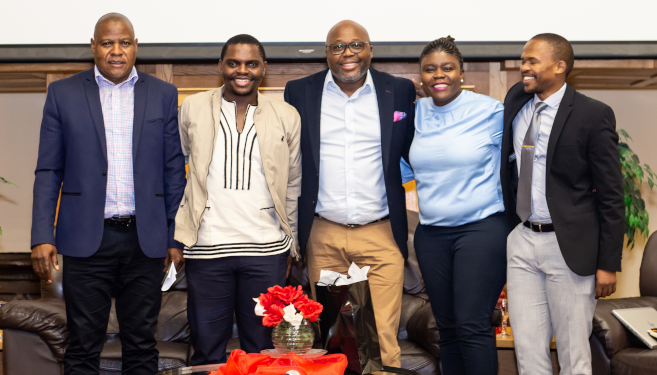 The latest business forum organised by the Graduate School of Business and Leadership (GSB&L) in partnership with the Durban branch of the Black Management Forum (BMF) critically discussed the development of impeccable ethical leadership for South Africa.

Mncane who shared insights on being in charge of turning around ailing retail group, Edcon, highlighted that transformation in leadership calls for confident and competent leaders with character.

‘South Africa needs courageous leaders who will not shy away or sweep big issues under the carpet but discuss and deal with them head on. Turning around a company such as Edcon requires honesty about how people in leadership were allowed to bring the organisation to its knees and how we now need to clean up this mess. Our job as leaders is to ensure that we add value to the jobs and challenges we find ourselves in and business schools must also take leadership in driving transformation,’ he said.

Speaking on ethical leadership of professional bodies, Ncoliwe questioned why entities have codes of conduct that commit employees to ethical conduct but do not adhere to them.

‘Theoretically, professional bodies are developing ethical leaders but practically, they are not. When you are in the public sector, you will always be under the spotlight because it’s other people’s money. However, in the private sector you are not under the spotlight because it’s not the public’s money. The great thing about staying ethical is that when the Zondo Commission sets their sights on your company, you will be the only one sleeping peacefully whilst everyone else is panicking trying to recall what they did three years ago. More needs to be done to develop ethical leaders in South Africa; leaders who do the right thing even when no one is watching,’ she said.

‘Ethical leadership has become a buzz word. Buzz words are fleeting and are often replaced by the latest trends and substituted without being realised. The problem in this country is that there is cohesion between corruption and politics, and society is divided. If we want people to behave ethically and build society then we need to start watching one another and not only be concerned about what is happening behind our walls. Otherwise, we will forever be complaining about unethical and corrupt leaders,’ he said.

Participants, who included GSB&L students and business practitioners also shared their views on the topic. Issues raised included whether business schools are doing enough to produce the type of leaders that the country needs; whether or not professional bodies are doing enough to groom managerial leaders; and the challenges female leaders face versus those confronting their male counterparts.

GSB&L academic, Professor Cecile Gerwel Proches thanked the panel and the audience for their valuable contribution to the discussion and said that the School is committed to contributing to developing and nurturing ethical leaders.