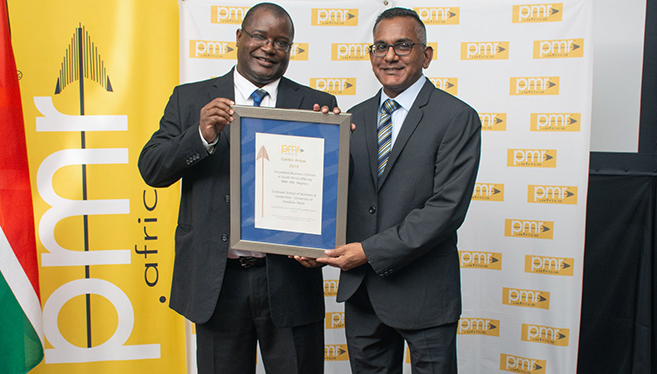 Top of the list was the Henley Business School-Africa with 8.42.

The GSB&L has been on an upward trajectory in the PMR rankings over the last five years moving from sixth in 2015 to second now.

This has motivated the School’s academics and support staff to think beyond the need to just meet enrolment targets and filling programmes and to start internalising value to please students.

School Operations’ Manager, Mr Dhashendra Naicker said receiving the award was a very special honour – an opportunity to celebrate excellence as recognised by the employers of MBA graduates in South Africa.

‘Through the years these rankings have helped us as a School to acknowledge and set bench marks for ourselves to aspire to greater heights year-upon-year. The current ranking has given us the opportunity to recognise the collective effort and the hard teamwork of both the academic and support staff,’ he said.

The School plans to focus on curricula redesign and realignment, cognisant of local, continental and international needs. They will also be concentrating on the targeted use of adjunct, associate and visiting professors, to augment the current skill mix. Going forward the School intends to pursue more robust industrial and academic partnerships.

The GSB&L was presented with a Golden Arrow Award at the PMR.africa Excellence Awards ceremony attended by South Africa’s top business leaders