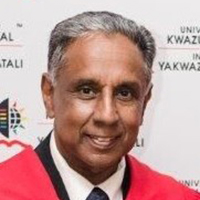 Kriben Pillay is the former Dean of Teaching and Learning in the College of Law and Management Studies and an associate professor in the Graduate School of Business and Leadership, University of KwaZulu-Natal. He is a writer across many genres; his poems appear in four South African anthologies, and his short stories appear in two. He was a finalist for the Bertrams African Literature Award in 1992, and was nominated for the 1995 CNA Literary Prize. His writings on transformation feature in a number of international publications.

His book, Radical Work: exploring transformation in the workplace through The Work of Byron Katie, has been published in both English and German. His children’s book on transformation, entitled The Story of the Forgetful Ice Lollies, was a finalist in the 2004 BASA Awards and it was nominated for the 2004 Vivian Wilkes Award. His latest creative output is Three Poisons – greed, ill will and delusion, which features three stories published in the UK in 2014 by Non-Duality Press. In 2014 Kriben co-edited the first volume of its kind, Teaching and Learning in the College of Law and Management Studies: Shared Approaches, Lessons and Good Practices.

A second volume was published at the end of September 2016. He has also contributed chapters in the pioneering 2016 books, Large Scale Systemic Change published by Nova in New York, and Disrupting Higher Education: Undoing Cognitive Damage, published by Sense Publishers in Rotterdam. The former was the outcome of the collective efforts of the leadership discipline at UKZN. Kriben’s latest book is The Survivalists: Visionary leadership for South Africa’s marginalised entrepreneurs, published in late 2018 by Knowledge Resources.

In 2008 Kriben was awarded the prestigious UKZN Distinguished Teacher’s award.