Airlines, airports… and the Durban Aerotropolis on the Skids!

Home » Thought Leadership Series » Airlines, airports… and the Durban Aerotropolis on the Skids! 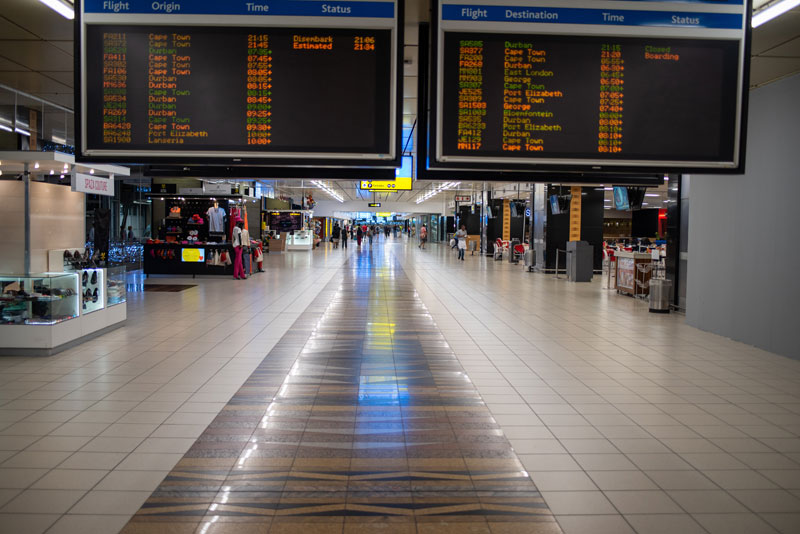 KwaZulu-Natal is currently in the implementation phase of the airport city development masterplan for the Durban Aerotropolis but bedeviled by the coronavirus disease which is causing disruption, uncertainty and fear in almost every aspect of life as we know it.

The aerotropolis is an urban development feature concentrated around an airport with the ultimate goal being to drive industrial and economic development. With the airport as its engine and foundation pillar, the aerotropolis is inextricably interwoven with the aviation industry at large, experiencing all the turbulence and turmoil buffeting operations.
Airlines are struggling, airports are not getting the traffic to sustain their operations, businesses around airport precincts are struggling and confidence in air travel has nose-dived. It is a very, very depressing picture with the future bleak, to say the least

All good questions which nobody has definitive answers for at this moment in time.
The success of an aerotropolis hinges on good airport planning, business site planning and urban planning, none of which is possible at present as the majority of airport plans around the world are in disarray.
And despite the G20’s commitment to keep foreign direct investment and international trade going during COVID-19, some countries are placing restrictions on incoming investment. COVID-19 has essentially disrupted all manner of business throughout the world and wreaked havoc within the global economy. Stock markets have plunged, companies are challenged and potential investors cautious to not commit to significant transactions which would include setting up shop in any country during this time. Urban plans are also impacted and project deadlines for the construction of some of the world’s biggest aerotropoli have been seriously disrupted e.g. Dubai South in the United Arab Emirates.

So what does this mean for KwaZulu-Natal? How does the Durban Aerotropolis grow when aviation, international trade, the global supply chain and the wider business sector have been almost brought to their knees by COVID-19?

As it stands, King Shaka International Airport (KSIA) is closed, the terminals are empty, birds are taking over runways and the pandemic is delaying the progress on various construction projects happening around the Dube TradePort precinct. Social distancing requirements have resulted in all urban planning with its related infrastructure developments being put on hold while all new investment initiatives have been halted in the various zones of the Dube TradePort enclave.

It is clear our provincial government needs to revisit plans for the establishment of the Durban Aerotropolis. A priority is navigating the realities of a thinned air transportation network in and out of KSIA – we have seen the collapse of the once proud South African Airways and its alliance partner South African Express and read reports of several other airlines either going bankrupt or finding ways to cut costs to stay afloat. Virgin Australia and Air Mauritius have been placed under administration while Delta Airline – one of the United States of America’s leading airlines – is selling a portion of its fleet to cut costs. In addition, Lufthansa is in talks with the German government about a bailout that would give the state a 25% stake in Europe’s biggest airline and even Richard Branson is asking the United Kingdom government for a bailout for his airline, Virgin Atlantic!

It is obvious that without an extensive flight network, airports suffer and when airports suffer, all that is anchored around them struggle too.
An aerotropolis – Durban Aerotropolis in this case – needs an airport – KSIA – to exist and an airport needs traffic for it to prosper. This is traffic in the form of in-coming and out-going passengers and cargo, from which an airport gains landing fees, aircraft parking fees and passenger service charges. An airport also needs business tenants to pay rental fees. In the absence of passenger traffic, these businesses struggle and may need to negotiate rental fee deferral. Without these revenue generating streams, an airport is unable to meet its financial dues in the form of airport taxes which include regulated charges to be paid to the South African Civil Aviation Authority and Air Traffic and Navigation Services.

Also, the government needs to ensure they can rebuild investor confidence post-COVID-19 -the zones of the Dube TradePort need investment in sectors such as electronics, pharmaceuticals, aerospace manufacturing, assembling and distribution. But restoring investor confidence in the current recessionary climate won’t be easy as investors seek to safeguard their assets looking for healthy indicators such as competitiveness of the economy, political stability, exchange rate stability, labour force availability, affordability and flexibility, safety and security, control of corruption, and quality of infrastructure, among others.

A government which can uphold a promise of all these considerations and more is well positioned to revive its post pandemic economic development. But what happens if our government struggles to make this commitment?
The provincial government may need to consider conceptualising innovation clusters with high investment returns to bolster the shock of the dreaded virus. The set-up of these clusters should not be divorced from the technological revolution that has fundamentally altered the way we live, work, and relate to one another.

To boost the productive capacity of the Durban Aerotropolis and KwaZulu-Natal, there perhaps needs to be deliberate targeting of firms and investment in artificial intelligence, robotics, nanotechnology, the internet of things and mobility technology, among others.